3. Buying or
Making Other Styles

In the US,  we could usually resolve a craving for a locally
unavailable specialty beer by
turning to imports. This is not always true in New Zealand. Being half
way around the world from almost everyone, even finding Foster’s or
Heineken is the exception, not the
rule. Nelson compares quite favorably to other towns
its size- with
the
high volume of tourism and immigrant residents, we  find
import choices in many restaurants and have two grocery stores that
stock a
surprising range of European singles, including lots of British,
Belgian and German choices. For whatever reason, they don’t
carry
interesting
Australian or American brews. And though logistically it’s
understandable, the prices can
be jaw dropping and their imports aren’t always
the
freshest. Saddest of all, the selection is still shaped by the
local preference for sweeter and less hoppy, so they don’t bother with
the
big, thick beers we dream about. 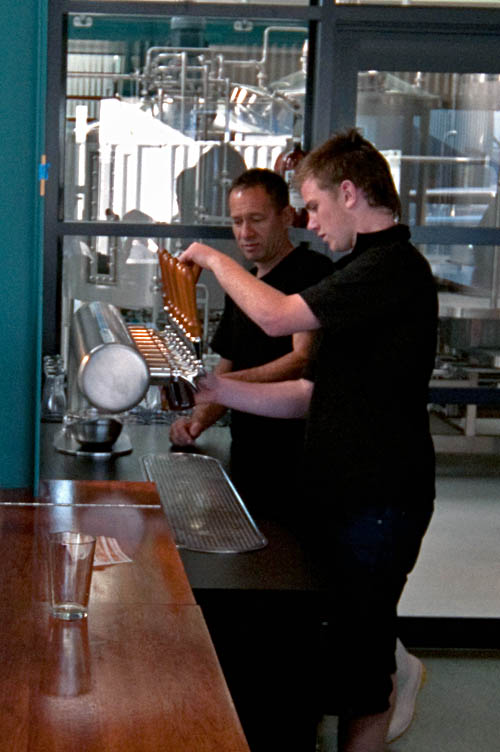 The Golden Bear in Mapua

Along side all of this arduous drinking in search of good beer, we were
also preparing ourselves to begin brewing. One of the ways
we learned most about beer is the process of brewing, where
you get to smell and taste the individual
elements- the grain, the hops, the yeast and even the water, so you
intimately understand the complex composition of the beer you are
drinking. From the beginning we wanted to understand New Zealand beer
this
way and it could possibly fill our beer gap.

Unfortunately, homebrewing in New Zealand is very
rudimentary
compared to the US. People
aren’t afraid to try brewing, and beer making kits can be found in
virtually every supermarket. But much like California in the 80’s, most
home brewers here buy a pre-hopped malt syrup plus an equal
part
of
brewing sugar to make a cheap substitute for beer. A few
better
homebrew stores exist, but the supply of
smaller
quantities for all grain brewing or the equipment
to make something with them is hopelessly limited. So far, we have made
our first mini-mash beer, using a combination of unhopped malt syrup
plus some whole grains and pelletized hops. Getting the
basic equipment and ingredients has taken many shopping trips
plus mail ordering, and we still don’t feel ready to try an all-grain
brew. Our resulting brew is tasty, and hoppy, though the limitations of
the ingredients is sadly obvious.

So how did we do in picking New Zealand? We have found a limited number
of beers we really like; local craft brewers make good quality beer,
though
not always in styles we prefer. In America we were spoiled for choice
in beer as
with so many other things. Here, we are learning to settle for the best
we can get, which is occasionally exceptional. In just the two years we
have been here, we have seen noticeable
expansion of the craft brewing scene. Locally, three new breweries have
established themselves in Tasman region, Tasman Brewing has
opened two new
pubs in Nelson
and Founders has been making some delightfully hoppy
seasonals. And, hurray, the Dead Good Beer guys have just made
regional variety permanently available by opening The
Free House pub.

Hopefully we are right that the beer climate here is like the US a few
decades back. We’ve
watched blokey blokes go from fearing beer with
more than 4% alcohol (“you’d be too drunk before you realized it”), to
regularly filling riggers at their nearest tap house. The nightly TV
news magazine program recently featured Epic Brewery as a booming
business in a shriveling economy. We can just sense
that this country where many small companies still gather for a beer at
the office before leaving on Friday night will continue to quickly
expand its demand for taste and intensity in beer. Until then, we just
need to travel abroad more…