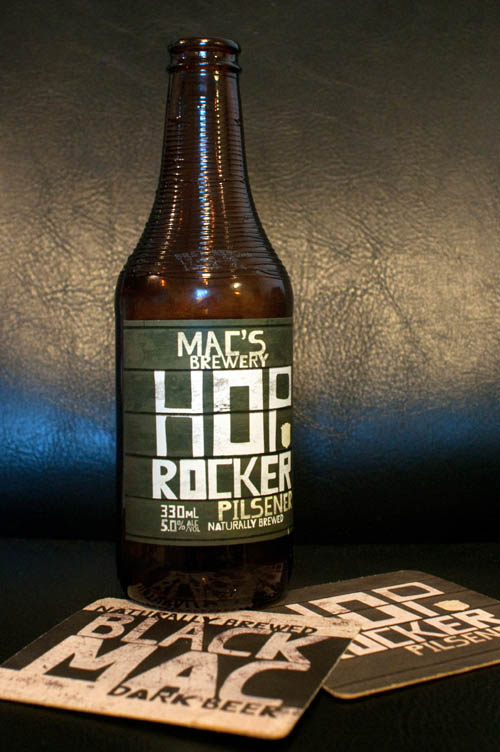 Luckily, beer here isn’t strictly limited to the commercial standard.
NZ has a second tier that nominally met our standard of well
distributed beers using quality ingredients to make a broader range of
styles. Typically, they will include a Gold, a Red (which might be
amber ale or lager), and a Black based on German Blackbier, in the
mix.
The first such brewer we explored was
Mac’s.
Originally a craft brewery in Nelson, it was bought by Lion
Nathan and is now brewed
around the country.
Even so, a Mac’s Gold packs
noticeably more barley and hops into the glass than
the commercial
NZ lagers. And when we are lucky we find their Hop Rocker or Mac’s
Black
or
at least Mac’s Red which are all perfectly palatable
brews. The
Hop
Rocker is a pilsner that stands up to its name and was the most
distinctly hop
flavored beer we encountered early on.

This biggest competitor to Mac’s is Monteith’s
which used to
be a
big independent brewery but now is owned by the other big guy,
DB.  They distribute a fairly solid match to most of
the
Mac’s brews throughout
the country.  Like Mac’s, they use all
quality ingredients and it shows, although they are
stingier with the hops and a tad more generous with sweetness. Speights
also tries to run a line of competitors, but all tend to be noticeably
blander.

Tiring of these limited ranges, we realized that we really need
more variety than we’d originally calculated. Lucky for us the town
where we settled,
Nelson,
is a rather beer-focused area of the
country with a handful of small craft brewers located
right
here, and more in the nearby Tasman and Marlborough areas. Our
second day in town, we booked a wine tour that added a stop at Tasman
Brewing in nearby Richmond for a tasting of nearly 20
craft brews. In addition to all the NZ lager styles and more matches to
the Mac’s styles, there were some distinctive beers including bock,
ginger lager and our first NZ porter. Despite some minor flaws in the
beers, we couldn’t fault them for their enthusiastic approach to trying
anything and everything. Yet we couldn’t help noting that the
New
Zealand aversion to hops and fondness for sweet was also influencing
their recipes. Mac’s Hop Rocker was still the punchiest beer we’d
tried. We also tried locals Nelson Bays Brewery and Lighthouse Brewery.
These guys
are really focused on the standard NZ lager market, though they
impressed us more
with their dark offerings.

We soon made our way to Founders,
who sell a very small range
of
truly handcrafted organic beers. Their mainstay Tall Blonde,
Red
Head
and Long Black all display a clear commitment to quality and are very
nice lagers, though not hugely distinct from the Mac’s lineup. They do
step above with their Generation Ale, which is distinctly British for
NZ, but they really set a new bar with Fair Maiden APA style ale.
Finally we
found some of what we had
been missing, as they clearly go all out on the hops. This beer was
just named the best beer in NZ, and we respect
the intent and quality. Yet even so we felt that a little something was
missing. In talking to
brewer John Duncan, we began to suspect the hops themselves. 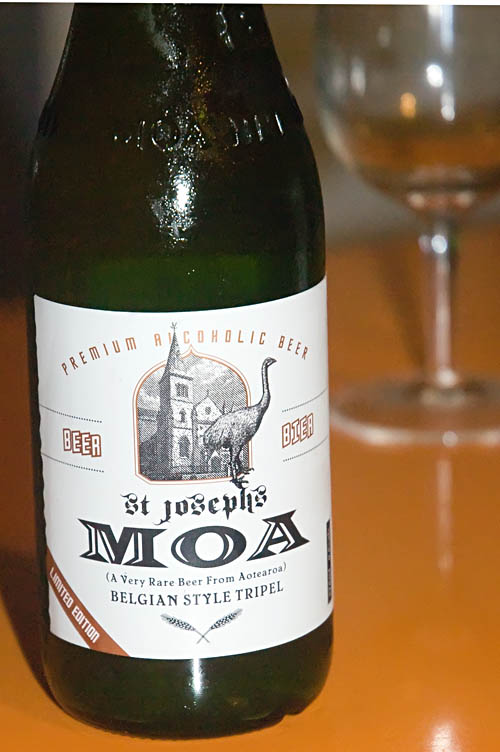 During our research before moving, we became very excited about the
idea of New
Zealand hops.
New Zealand grows most
of the world’s organic hops because careful breeding has produced pest
resistant varieties,
so they don’t require the same pesticides and fungicides. And virtually
all of these
hops are grown right here in the Tasman region, so we expected
plentiful, wonderful hops. Unfortunately, that pest free stock is of
some rather unusual varietals, as the European ‘noble’ hops just don’t
thrive here. Instead, most hops here are very bitter, high alpha hops
that have weak or unpleasant flavor and aromatic qualities. They are
expanding into complex, floral and citrusy aromatic hops similar to the
mainstay of so many of America’s stunning premium
brews but they aren’t exactly the same and supply is very
limited. Craft brewers here just don’t
have the hops to create
beers
with the flavors and aromas we crave.

Since those first few months, we have done quite a bit of beer
traveling around the South Island where we have encountered many more
small brewers. Dead Good Beer Events has also
expanded our range of
experience through their wonderful quarterly beer fetes. We have
learned that like Founders, these others brew mostly the familiar
styles that appeal to the NZ palate, and typically have one or two
outstanding specialties. A few specialize- Moa
brews Belgians, Emerson’s
has British ales, Mussel Inn has the unusual Captain
Cooker manuka beer,
and so on. This helps with the variety, though we still find only a
very few that really wow us.