Here is the basic
action plan for the Orion head mod:

1. Getting a TeleTrack is pretty easy if you live in the Northern
hemisphere.
Amazon

sells them. In Austria,
TSZ sells them without
the tripod, which saves some money. For anywhere else, check the
official distributer list. I had
mine shipped from the
USA, I am still looking for sources for all of the
parts in
Australasia. If you have any ideas let us know. While you are waiting
for your TeleTrack to arrive, you can gather up the other parts.

2. As shipped from Orion, TeleTrack has a controller that is useful for
astronomy types, which is easily configured to track stars. The
panorama
head modifications retain that ability. What we are doing is replacing
the controller in a non-destructive way. You can use a Linux, Windows
or OS X powered computer or device, as long as it can run python, and
communicate with the Orion
head. Frédéric Mantegazza has developed
open source control software in python, hence
the requirement. He is
using a Nokia Internet Tablet, and has optimized the software
for
that purpose. I bought a used Nokia
770 tablet on Amazon.com.
(See
below for more info on the Nokias.) Another popular choice is the Asus
EEE PC.

3. One appealing aspect of the project for me was its
configurability.You have your choice of external controller, and of
connection mode. The
head is run from the external controller, via a serial connection. This
interface connection can be established via a cable, via bluetooth, and
probably
via Wi-Fi, though I don’t know of anyone trying that. I decided on
using
bluetooth. This connection hardware is actually most of the DIY part,
as the software has already been written.

What you need for the interface:

You will also need a soldering iron, wire strippers, bits of wire….

4. The Orion/Merlin ships with a 2.5 mm phono plug cable for
triggering some Canon cameras. If you have the film or digital version
of the Rebel (including the XT, XTi, XTsi, 300D, 350D, 400D, 450D), you
are set to go. Everyone else needs to get an adapter. If your camera
has a wired remote, as my Nikon D80 does, the easiest thing to do is
buy a cheap 3rd party remote and use the plug. If your camera
only
has an LED remote – like my D70 and Nikon’s D40 and D60 cameras, you
will need to purchase or make an LED trigger. 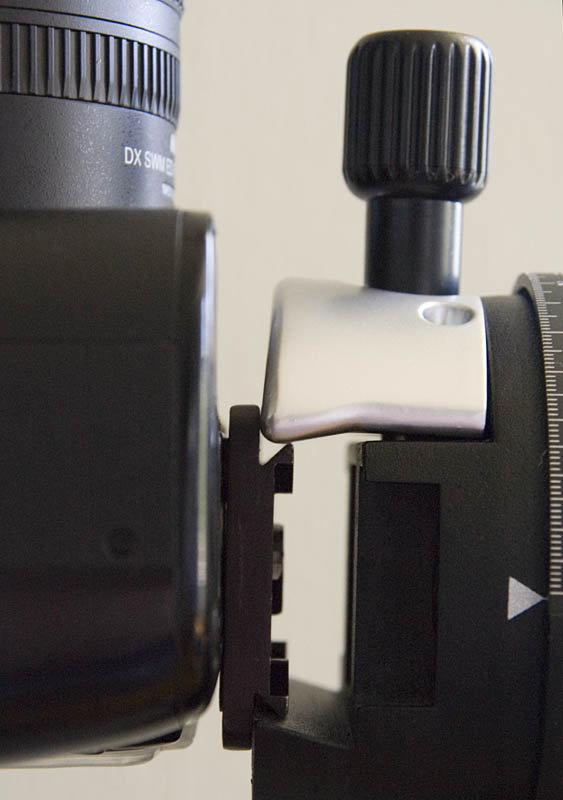 You may also need to customize a mount, depending on your intended
camera and usage. The Orion TeleTrack has a beveled L-bracket that
works out of the box if you plan on attaching a telephoto lens to it ,
with the camera dangling behind. Otherwise, you might wan to
dissassemble the L-bracket, or substitute your own. The beveled edge is
about 45 degrees, but too big to line up with my arca swiss
gear.

I cover my solution in the next section.