I have been
interested in making a motorized head for my panoramic photography
since I first read about Cirkut cameras. The idea that you could set up
an apparatus, push start, and generate a panorama was intriguing to me.
I will admit however, that I am adverse to film, and prefer digital
solutions. I looked into cameras made from old scanners, and even tried
to make one, but ran into driver problems. I am also cheap. The Seitz
Roundshot D3 is awesome, but at more than $30,000 it is way
out of my
league.

Finally I found an outlet for my interest. I have been keenly following
a project on the AutopanoPro forums for about a
year now. At first most
of the information was in French, but soon enough the English speakers
caught wind of it too. Orion, the American telescope company, has a
motorized tracker that can be adapted for panoramic photography. The
TeleTrack head, sold under the Merlin brand in Europe, costs around
$250 USD. With some additional hardware, and a free program developed
to control it, you can build an automated panoramic clicking machine.
In this article I will describe how I built my unit, and hopefully
provide some guidance and resources so you can, too.

I should say that though I feel it is a pretty simple project, I am
assuming you will have (or can get) a basic understanding of panoramic
photography, feel comfortable using command line instructions, are
comfortable with basic soldering of electronic components, with using a
ohm
meter, and can adapt the information to your SLR and computer system.
( I used a Nikon D80 and a Nokia 770, plus my Windows PC.)
Myself, I
had never used a Linux machine apart from logging into my web server. I
had put together a
theramin
kit
some years ago, so I had a some
experience soldering onto a circuit board. Mostly I have read
up on
the internet, and put together a plan of action. I will try to provide
some of those resources during and at the end of the article to fill in
any gaps in my narrative.

In a nutshell, this project takes
an off the shelf telescope mount, adds a bluetooth interface and a
tablet controller, and downloadable software to create a motorized head
that can take a series of photos automagically while you stand tens of
feet way. Here we go: 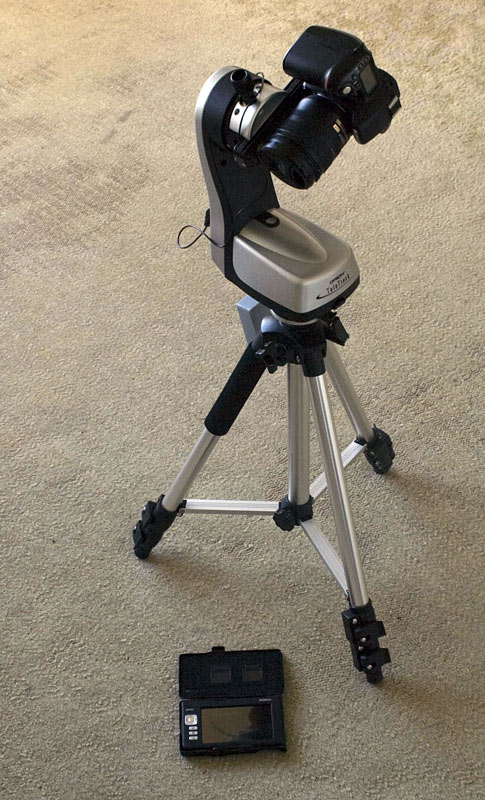 In September of 2007 there was an announcement in various internet
forums about a new motorized panoramic head. It was a joint
project between Charmed Labs and Carnegi Mellon University, with the
aim to create a new way of
exploring photography. By creating affordable hardware and stitching
software, and a web
portal, Gigapan hoped to create a strong user base
creating gigapixel panoramas that could be explored by anyone.
Many of us were intrigued, and signed up to be beta testers of the new
device. I wasn’t chosen, but I followed along as the first images
flowed into the website. By using a pyramidic
image scheme like
Zoomify or Silverlight, the Gigapan images are loaded into your browser
in small
enough chunks that the huge files are not unwieldy. The viewer on the
site allows you to zoom in and in and in, with detail increasing as you
drill down.

I have to admit that I have not been using my manual panoramic head
much since I discovered AutopanoPro (APP). Usually I find myself out
and about somewhere and see an image that could be a little wider, so I
set things up and take a series of handheld shots. Most of the time it
works. (See this article for some or our tips
on shooting handheld panoramas.)
Still, I have had a couple of occasions where an automated head would
have been nice, like that time when I tried to take a panorama of the
view of Nelson from the Grampians behind town. I needed to bracket, and
ended up with 300 images which didn’t stitch well as the sky
and
ocean shots provided nothing for control point creation. I don’t have
indents on my manual set up, so the columns were not exactly lined up
either. Besides, a robotic head is cool. Its ROBOTIC! It amazes
children and adults alike. You set up one of these things on a busy
city street and while you won’t attract too many women, you will
attract lots of other technophiles. (I am looking forward to
meeting many such people as I use my new toy.)

Ok, so I was shut out of the Gigapan beta. Then I heard about the
Orion/Merlin TeleTrack setup. And then I realized that the Gigapan was
not ready for SLR use anyway. Here are some advantages of this
alternative:

There are some disadvantages: