So, I had several thousand images taken over three or four months, and
10,000 miles of travel. I needed batch capabilities, and I needed to
determine how accurate I wanted to be. These images are taken with a
Canon S70 and a Nikon D70, and are both JPEG and RAW formats. I wanted
to
put the data into the EXIF header of the files, or a possible sidecar
file. Generating IPTC keywords would be a bonus.

Several software options came up in my search:

Finally I stumbled on Geosetter. These are the features that make it a
winner:

One main drawback is that it is only Windows based software. Mac folks
might try HoudahGeo
or Geotagger.

It’s
really simple. Fire it up online and it brings up a Google map page. To
use this program:

Using the Edit Data dialog to set the Image Altitude

I had a shot of Mt Augustine, an active volcano, taken out of a plane
window. How should I geolocate the image? First I used Google
Earth to approximate the location of the plane by getting an
approximate image along a straight flight path to Homer from McNeil
River, where we had been camping. Selecting Image>Edit Data from
the
GeoSetter menu, I then adjusted the altitude to represent a small plane
somewhere
around 1500 feet. 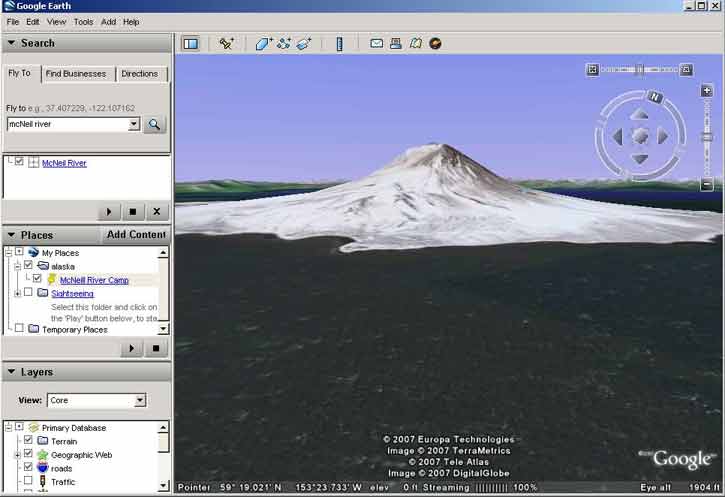 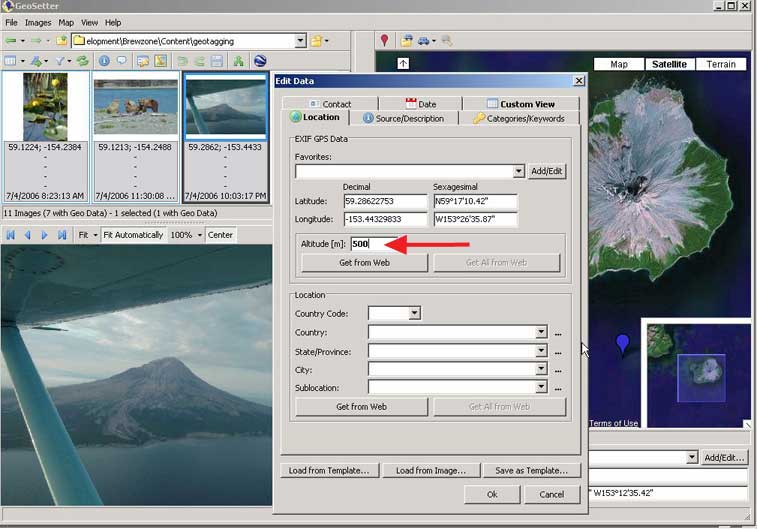 In the end, I
had a nice map with all my images located on it. 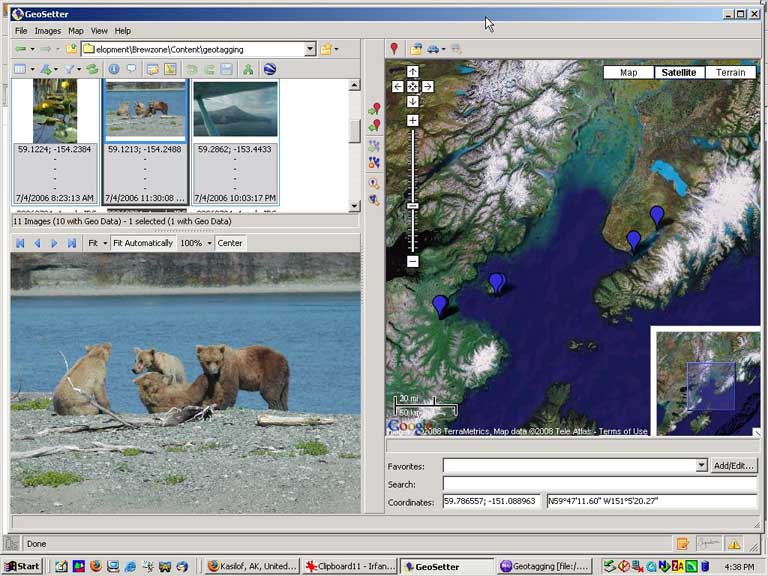 The Google Earth Workaround
GeoSetter has useful but limited functionality if you are not
online. It allows you to move information from one image to another
without using the map. It does not interact directly with
Google
Earth, the
program you download onto your computer, but with version 2.5.2 or
newer imports either format
of GE files. Now you can export your favorite places from GE,
then
import them into Geosetter. Begin by right
clicking on the places folder in Google Earth, and selecting “save as”.
You can then apply them to your images.

Other Stuff You
Should Know

Exiftool
is the key underpinning of many interfaces, including GeoSetter. This
freeware perl script
created by Paul Harvey allows the reading and writing of meta data to a
large variety of photo formats, but it works via command line, and
requires additional software to run in a windows environment.
Consequently, many programmers have wrapped it in other more
user-frendly graphical interfaces (exifer,
exiftoolgui).
Though Exiftool is
widely regarded as safe, modifying EXIF headers can corrupt your files.
Test this software on duplicate images to make sure – sort of like
that inconspicuous bit of fabric you are supposed to use to see if it
is colorsafe. Geosetter can create backups as it goes along, for
safety sake.

One thing to remember if uploading EXIF encoded photos for public
consumption, is that many
services do not utilize EXIF data unless told to. (Location data
especially, as it could be a privacy concern. Would you want the world
to know exactly where you live?) You may have to turn on geocoding, or
tag generation from EXIF in order for the software/site to utilize it.

Now all I have to do is annotate those images. I think there are three
thousand of them… The good news is that most of them are of
bears, within an hours walk of the camp at McNeill River. I can get
pretty close and bulk code them. Will it be worth it? Looking down at
a map of my journey, I can say yes it will be.