Driving from our camp in northern Nevada to the San Francisco Bay Area
should have been a 8-9 hour drive. After 10 hours in the car we had
barely escaped South Lake Tahoe, and knew we had to give up. We scanned
the map, and didn’t see any standout destinations before Sacramento, so
decided to bail out of the Labor Day traffic jam in Placerville.
What we found was a mixed bag, but we expected a lot worse.

Not that we’d ever heard anything bad about Placerville. It’s just that
we’d been driving through one kitschy Gold Country resort town after
another, and we weren’t in the mood for tacky touristy overload after
our week in the desert. We really didn’t want to waste even part of a
day of our limited time in the States in a trap designed for
mid-western grandparents. And then, as we approached the town on I-50
from the north, we just saw a depressing collection of run down
services, including a gas station and a frumpy independent motel.

Being hopeful, we drove down around and
through the center of town, but saw not one other lodging option and
turned
back. We decided we were lucky they had a room available, and forked
over the $89 knowing it wasn’t buying any sort of luxury. We got a room
that might not
have changed since 1987,  and set about cleaning our
camping-filthy bodies before seeking dinner.

We’d asked the clerk what restaurants might be open on the holiday and
she figured
most things in town would be. We scanned the room guide joking that
every town in California must have a brewery, and in fact found the
Placerville
Brewing Company listed on the dining map.

Described as a 5 minutes drive south of the historic downtown, we
imagined it must be in a modern strip mall shopping district and
probably with all the
chain motels we’d been seeking. This district did house the modern
shops, but not enough to even fill a strip mall, and still no motels.
We found the brewery tucked into a hillside next to the bail
bondsman, promising outdoor dining amid non-descript architecture. We
made our way through a thoroughly unmemorable interior to the patio to
choose a seat. Our young waitress was casual and flirty but efficient
on a not too busy Monday night.  She described the beers from
personal knowledge and offered tastes which we carelessly declined.

We were intrigued by the tangerine wheat, but to go with our meal we
ordered a pale ale and a copper. After a few
weeks of being blown away by big American pales, with high hop and
malt levels, this pale seemed slightly underwhelming, but it had no
flaws and went well with food. We couldn’t say the same, unfortunately,
for the copper. With burnt phenolic aroma and flavor and an unpleasant
aftertaste, this beer didn’t present any of the smooth copper traits
beyond its color. It disproved our developing theory that the American
microbrew scene had gotten completely beyond bad beer.

The menu had several appealing options among the fairly standard pub
fare. We selected a pulled pork sandwich, substituting onion
rings for the fries, and a Greek pasta salad.  The extremely
tender and flavorful pork was drowned in a very smoky and rather sweet
but overall
tasty BBQ sauce and served on a boring white bun. The rings had very
mild onions (parboiled before frying?) in a thick crisp batter that was
perfectly fried. The salad was very attractive, with generous quality
ingredients including olives and feta, slightly underdressed in a
standard vinigarette. The prices were quite reasonable for dinner
portions. Overall, the food was well enough made and hit the spot, but
wouldn’t win any awards.

After the meal, we craved dark beer for dessert. We had two cans of
Guiness in the room fridge, but decided to give the brewery one more
shot and
requested a few tastes. We were pleasantly surprised, and decided to
stay and share a stout and a vanilla bourbon stout.  The stout
was
full but dry in style, making an excellent base for the vanilla bourbon
which was the highlight of the evening. Fortunately, the vanilla was
subtle enough that it could have simply been part of the oak from the
bourbon barrel it was aged in. This beer was refreshingly dry but
explosively flavorful. A perfect finishing course. Though we would be
wary of weak spots in the menu, for beer and food, we came away willing
to try it again in the future. 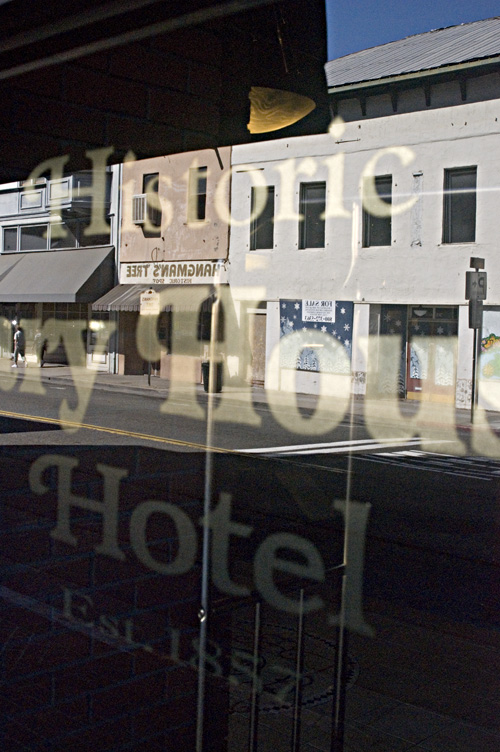 The next morning we packed up while downing our packaged pastries and
bland coffee that served as the “continental breakfast” and headed into
the exceptionally historic town for a camera stroll. We lucked into a
parking spot in front of a local bagelry, and decided to conclude
our
walk there with a proper breakfast.

We expected to be nauseated by ‘authentic’ ‘historic’ ‘restored’
touristy shops piled one on another along the main street, but actually
found a real town of quality businesses dominating the selection.
After driving past hundreds of miles of endless chain store
outlets and megamalls along the interstates, these genuinely passionate
retailers making a go with their galleries, cafes and clothing shops
were quite refreshing. We were surprised to find that the shops were
mostly “high end ski
town”, with rather classy decor tucked into the old gold country
false-front buildings.  It turns out that instead of motels,
Placerville has a goodly number of B&Bs to cater to its
apparently
wealthy tourist base.  But unlike an actual ski town,
interspersed
were shops like the original Rexall drugstore
and a Goth fashion gallery that represented a living breathing town. We
took a few photos of the cool old
buildings then went in for our bagel, where we heard the owner
explaining
that no, the Starbucks had gone out a year ago, she’d been running
for nine months and yes her coffee was actually better.  What
a
nice change to enjoy a local shop that replaced a Starbucks!

As little tourist towns go, this one was a surprise. It was more
about B&Bs and gourmet cheese shops than expected, but it had
enough variety to prevent that Aspen feeling of being underdressed to
walk the streets. In the end, their Thomas Kinkade
Gallery stuck out more than the lack of a Starbucks and somehow our sad
motel and average brewery were still better than the chain motels and
restaurants we’d have gotten down the road. Just like with the brewery,
if you watch out for pitfalls, you can make a nice visit in Placerville.