Penguins live on the ice, just ask Disney and virtually every
documentary you’ve ever seen. So you can be forgiven if they don’t come
to mind with your first mental images of New Zealand. Even Lonely
Planet fails to include any penguin pictures or mention them in the
list of native birds and animals at the front of Lonely Planet New
Zealand. But we do have three penguin species native to the
coasts of the South Island with numerous colonies, thousands of birds
and a sizable tourist industry build around viewing them. And last year
we discovered that even though they burrow in rocks and sand instead of
flocking on ice, they are every bit as cute and penguinlike as their
more southerly cousins.
Here’s a succinct overview of our fast-paced trip:

1. In Search
of Penguins

Last summer we spent a few weeks around Christmas (yes, that still
twists our brains, too- summer and Christmas) doing a whirlwind driving
tour
of New Zealand’s South Island. We were accommodating an American friend
who was
desperate to see as much of the amazing country and unusual wildlife as
possible in just a couple of weeks. Having been here for a year
ourselves but having seen only
one wild penguin, we were definitely on board with making every effort
to
ensure penguin sightings on the trip. Our one past success had been a
touch disappointing, since the floating bird more resembled a
duck than any penguin we’d ever seen on TV, but we were
optimistic
that
land sightings might be a bit more thrilling. Plus we were going in
prime season so our chances of close encounters were high. The only
problem was that the sheer size of the trip was stretching our budget.
We couldn’t really afford the $30- $70/person guided tours and wanted
to
take advantage of free viewing if at all possible. 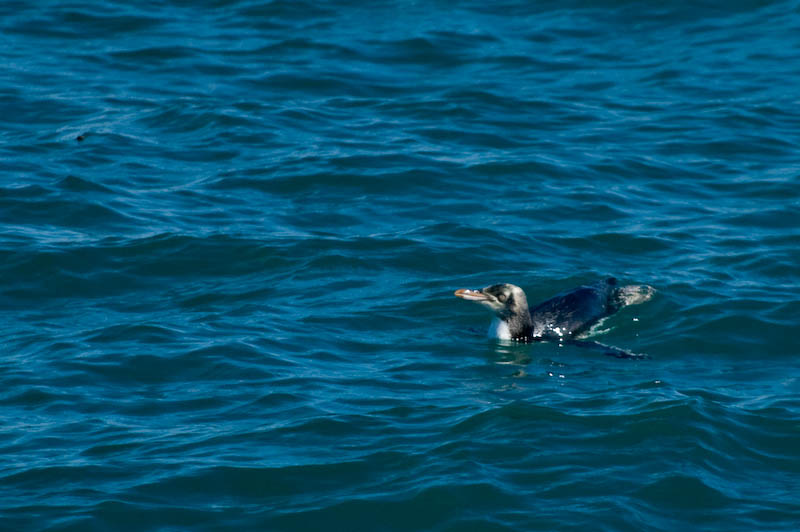 Despite their
oversight in the
introduction, Lonely Planet New Zealand does list quite a
few free penguin viewing sites around the island. We also found free
sites listed in the excellent Southern Scenic Route guide provided at
many iSite
locations. We link to many excellent online resources, and the rest of
our information came from talking
to other travelers and locals once we got into penguin country.

From our home in Nelson at the top of the South
Island we chose the clockwise route around the island.
This bode well for faster penguin viewing since we were hoping to see
the little Blue Penguins and Yellow-eyed Penguins that breed on the
southeast coastline. We had learned from New
Zealand Penguins site that Blues are quite numerous and can
be seen in much of New Zealand. They have large, accessible
breeding colonies from the Banks Peninsula all the way down through the
Catlins.
The much rarer Yellow-eyed, found only in New Zealand, have just 500
pairs breeding mainly from Oamaru to the Catlins. The third mainland
species,
Fiordland Crested Penguins, which breed on the southwestern coast have
unfortunately already moved out to sea by December.

So, we clipped off
the northeast corner of the island and headed on down to Christchurch.
There we stuck to urban sightseeing, skipping the expensive Antarctic
Centre with optimistic hopes for the southerly coast. 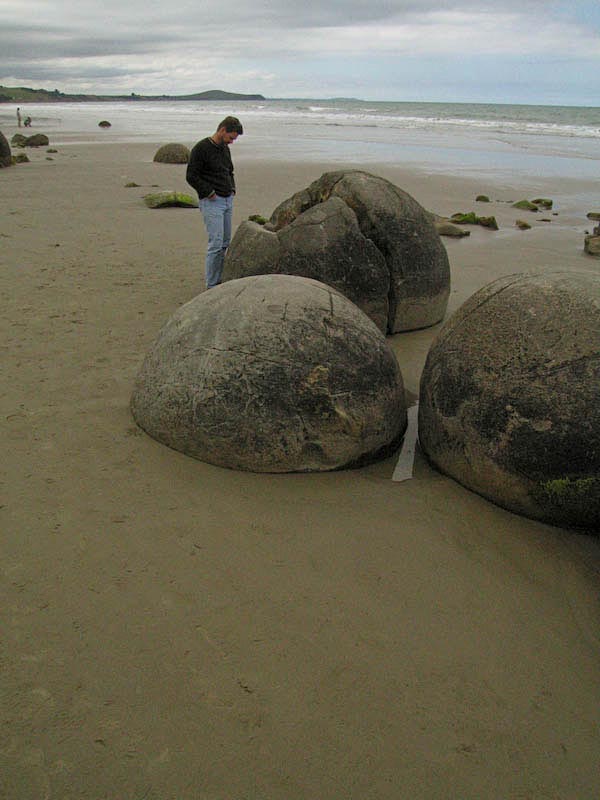 We didn’t have
time or funds on this trip to go back out to Akaroa,
although
Pohatu
Penguins Tours claim they have the largest Blue Penguin
colony
on the island. Instead we headed directly to
Dunedin, stopping for lunch in Oamaru. After picking up a few
selections from the award-winning Whitestone Cheese factory, we drove
down
and
parked along the small boat harbor for our picnic. After lunch, we
swung by the Oamaru
Blue Penguin Colony,
but as expected we were much too early for
the dusk viewings.

We had hundreds of miles to cover, and the idea of
paying to view from crowded bleachers didn’t really appeal, even if
they did have 130 breeding pairs. So it was on to
Dunedin and the Otago Peninsula then
for our first real opportunity. We could have pre-booked a
pricey
daylight guided tour of the Oamaru colony, and we left wondering if we
would
regret skipping that.

Driving Highway 1 to Dunedin is a fairly straight long country road,
mainly rolling through green sheepy hills, and occasionally passing
through small towns. Moeraki is one of the only features along the
drive with its round boulders, a bit of holiday development and a few
small penguin beaches.  We stopped to see the boulders, which
are
praised in several guidebooks, and were expecting something a bit more
imposing.  Still, they were amazingly round, it was a
beautiful
beach and we enjoyed the walking break from the car.  It was a
bit
early still for dusk penguin viewing and we didn’t really have time for
the hike involved, so we pushed on to Dunedin.